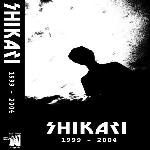 SHIKARI 1999-2004 discography tape fast emo violence hc from Groningen,Netherlands.(January 2005)
A complete releases including their ROBOT WARS 10”, SHIKARI/SEEIN’RED 10”, SHIKARI I7” / CDEP, SHIKARI/SEEIN’RED 3” CD, MAXIMAAL NTHAAL COMPILATION CD and the new 2004 split 7" with PHEONIX BODIES and ACOA DIRETA) "Among the most intense live bands going, Holland's SHIKARI capture the intensity well; everything is here except Mark rolling around in beer and filth in my living room (not that there is any beer or filth in the living room, I am very neat and tidy). Great American Steak Religion fans take note...heavy mid 90s influence (ONE EYED GOD PROPHECY? I think so.) with loads of double bass and melodic walls of guitar over shrieked vocals. Chaotic metallic tortured violence seeps with very deep and often dark personal lyrics through these 23 tracks. This could easily be one release, but the songs are culled from 5 records and assorted compilations.No complaints". Slug & Lettuce Issue#83
Posted by bullwhiprecs at 12:18 AM