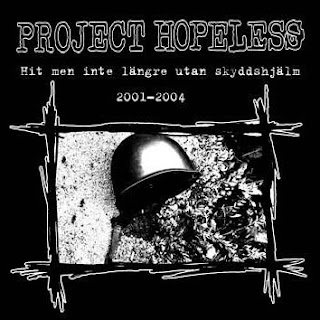 PROJECT HOPELESS is a fast raw political crusty hardcore from Sweden.They have been compared to Skitsystem and Mob 47 but more darker. This discography cd will contain all the released material by them from 2001-2004 the Kalla jävla samhälle LP, song from the Antifa comp, split 7" w Offensive, the Utsatt 7"and the s/t 7", this will be 40 songs of raw hopeless hardcore.Brilliant releases!!!! It's yours for RM11ppd(Malaysia),6USD ppd(Asia) and 8USD ppd(World).Contact us for a possible trades and cheap wholesale.
“This is rad Swedish heavy punk and I like everything about this band, especially the dual male/female (or so it sounds) harsh vocals…” - Slug and lettuce

”Fucking raw political crusty hardcore from Sweden. Musically, this reminds me of a lo-fi early SKITSYSTEM mixed with NO PARADE, but darker. Most of the lyrics are in Swedish, with explanatory paragraphs in English, covering such topics as homelessness, class and race issues, and government all from a very misanthropic point of wiev. Very punk. Good solid album, but I do think the vocals carry it a bit. With a lesser vocalist, I would probably get bored” - Profane Existence ”There are many bands playing rawpunk around the world, but there are few that are as RAW as Project Hopeless are. High speed, intensely screamed piercing vocals, backed up by some growling here and there, crisp guitars and manic drumming….” - Attack! Fanzine

”Of all the millions of Swedish hardcore bands roaming around that country I think this band represents that country’s punk roots best. Their trick is not to overproduce and turn raw d-beat punk into polished d-beat heavy metal. This bands guitar tones would do CONFUSE proud….” - Short fast and loud
Posted by bullwhiprecs at 12:36 AM