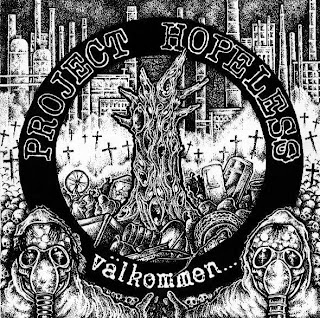 "From start to finish this LP left me standing stunned and with my jaw hanging open in pure hardcore bliss! This is the second LP from this Mälmo, Sweden based band and is the culimnation of what all those earlier releases were building too. What we have here is ten extremely pissed off and raging hardcore songs, with both classic d-beat and crust influences, and multiple screaming vocalists. Some of the tribal parts and the heavily accented English parts give this a real classic 80's anarchopunk /crust feel of such bands as GENERIC, SEDITION, A.O.A., OI POLLOI etc. The recording is absoluitely perfect for the music - with a totally raw and analog sound that lets you hear every part without sending fake or overproduced (like early OI POLLOI or the NAUSEA LP). Lyrically this is poltiical as fuck, with lengthy, anger-filled songs written in both Swedish and English. All of the packaging is classic pen and ink work by Steve from VISIONS OF WAR, giving it the appropriately crusty packaging. This record rips hardcore and you would be a total fool to pass it up! Enjoy with a bottle or three of fine wine". review from Profane Existence magazine.
Posted by bullwhiprecs at 12:40 AM